Join Engelbert Humperdinck, a longtime, iconic British pop singer, on the Concert Hall stage at Stambaugh Auditorium! Engelbert has recorded a variety of music genres from the most romantic ballads to movie theme songs, disco, rock, and even gospel. In a career spanning over 50 years, Engelbert has generated sales in excess of 140 million records, including 64 gold albums and 35 platinum, four Grammy nominations, a Golden Globe, and stars on the Hollywood Walk of Fame, Las Vegas Walk of Fame, and Leicester Walk of Fame. He has performed for the Queen four times, several presidents and many heads of state. 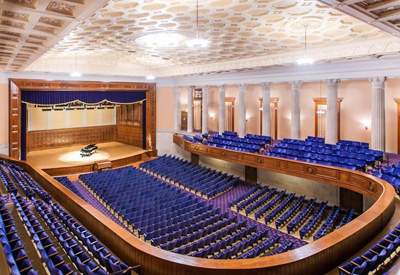 The Concert Hall is a 2,553 seat music performance venue built in 1926. Seating is over three levels, the main floor, the balcony level, and the gallery. The Concert Hall walls are Indiana limestone with wood paneling on the balcony fronts. The stage has natural hardwood floors and a permanent concert shell. The space also features a Steinway Model D concert grand piano and a 59 rank E.M. Skinner pipe organ with a 4 manual console and 4,000 pipes ranging from a few inches to 32 feet.

Stambaugh Auditorium is a non-profit public auditorium which opened in 1926 through the generous gift of Youngstown area businessman, Henry H. Stambaugh. The facility is located on 5th Avenue across from Wick Park in Youngstown, Ohio.